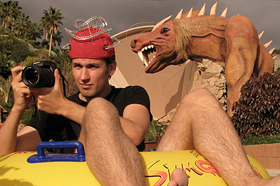 Siam Park Tenerife is a wonderful addition to the European water park family, which is pretty small compared to the United States. Three major attractions make this water park unmissable:

- 'Tower of Power', a nearly-vertical slide leading through an alligator's pool (at the time of writing the alligators didn't make it to the park as they didn't get through customs)

- 'Dragon', a funnel-shaped slide (it's called a 'ProSlide Tornado') which is the only one of its kind in Europe and makes even the cool guys scream

- 'Wave Palace', a giant wave pool which is familiar to those who've visited Disney World's Typhoon Lagoon in Florida. It's really awesome: it slurps the unwitting into the deep, separates families and spits you out utterly bewildered

The Thai theme doesn't blend very well into the Canary Islands condo background, but given the quality of the rides it will be forgiven. If you have just two days in Tenerife, visit the Volcano on the 1st day, visit Siam park on the 2nd day and buy a postcard of the beaches for your mom!