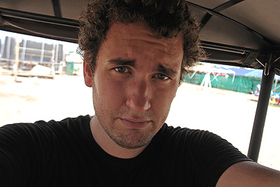 A tragic story took place here. In March 2013, a young female Japanese tourist lost her life when the roller coaster pictured below derailed. It seems incomprehensible that you can lose your life in such a ludicrously small, flat and probably slow coaster. But you can. It happened. This incident really touches me. A girl who, finding herself surrounded by the spectacular ancient temples in Siem Reap, but who chooses to ride a rotten roller coaster instead, would have been my friend. I surely would have sat in there too, as did her Cambodian tour guide who succumbed to his injuries later in hospital. Rest in peace, the both of you.

The funfair has been closed since by the local authorities. I wouldn't be surprised if most of the rides have never been maintained. There are places that should never have been opened in the first place.