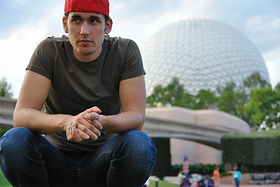 Epcot is a unique member of the Disney theme park family and I would call it Disney's second best in North America. Opened in 1982, its 'futuristic' design is a bit timeworn but inside the decades-old structures you will be amazed by genuinely state-of-the-art crackerjack rides. Not to forget the best world exhibition ever, right behind!

'Test Track' is Epcot's best attraction and exclusive to the park. The ride vehicles of this so-called slot car ride move forward, brake, move again etc., creating storytelling possibilities unimaginable just 20 years ago. A serious surge of adrenaline awaits you at the end when accelerating to great speed into Formula 1-like race curves. This attraction is addictive and you’ll want to ride it again and again.

'Mission to Space' features Apollo 13-star Gary Sinise as the instructor and space commander. You will enter a small, narrow capsule (if you suffer from claustrophobia, don’t do it), which gives you and three other riders pseudo-control over a space ship boosting away to Mars. The original version runs with a centrifuge that flattens your face like an astronaut accelerating into space. It’s pretty tough for a Disney ride. In the meantime, an additional, softer 'green' version has been installed as an alternative, guaranteeing a nausea-free experience.

'Soarin’ is a brilliant 'flying' movie ride, originally designed for Disney's California Adventure. 'Ellen's Energy Adventure' turns a movie theater into a slow dark ride packed with dinosaurs: it's a wonderful idea, even though the humor leaves riders silent and the whole attraction feels a bit outdated. 'Spaceship Earth' dark ride within the park's trademark orb-shaped building, 'The Seas with Nemo & friends' aquarium and the brilliant 3-D movie 'Honey, I Shrunk the Audience!' add to the incredible Epcot experience.