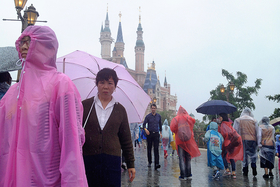 I had the chance to visit Shanghai Disneyland during the trial period on June 3rd, 2016. I did not take pictures on my visit, please head to themeparX for videos and photos taken by other visitors.

First of all, I am absolutely convinced this park will be a financial success. It will be so successful that the mouse – the physical mouse in charge of being hugged by the people of China – may be in danger.

Now, the main question: is this the best Disney park ever built? My answer: No. In fact, I think Shanghai Disneyland is one of the least 'magic' Magic Kingdoms ever erected. Main Street and Disneyland Railroad both had multiple reasons for their existence, and they are dearly missed.

The 'Gardens of Imagination', planted instead, is neither very imaginative nor inspiring, but rather flat and soulless. The same can be said of the overpowering, square castle, which looks very disconnected from its surroundings and has a bit the energy of the Tower of Terror (real princesses would move into this one). Same with the four Lands. There are very few cozy, charming places in Shanghai Disneyland. The whole park lacks density.

Of course, there is a reason for this. You can't built a park with narrow, romantic alleyways for a population of 1 billion keen to visit. The city of Shanghai itself dealt with deadly stampedes recently. Walkways must be wide. Main Street must be replaced with a giant plaza. All logical. Nevertheless, it has taken a toll on the charm.

Now, to the attractions: big praise here! There is no real storytelling innovation, but new technology has been employed smartly. While Shanghai Disney is by far not the most beautiful Disney park ever built, it is probably the most complete upon opening. The line-up of expensive, top-notch attractions is huge, with the 'Roaring Rapids' river rafting ride, Soarin' movie theater, a reinvented version of Pirates of the Caribbean, Seven Dwarfs roller coaster, Peter Pan dark ride, Tron coaster and Buzz Lightyear laser ride. Tron makes for an excellent coaster thrill, and the new Pirates of the Caribbean is a mind-blowing attraction employing never-seen-before technology that will have even the most seasoned theme park visitor or critic look about in awe – the boat movements, animatronics, underwater scenes, all absolutely fantastic! Just for the Pirates ride alone, it is worth taking a visa-free transit flight through Shanghai.

Bottom line: Hong Kong Disneyland opened with all its charming magic glory and (almost) no attractions. Shanghai Disneyland did exactly the opposite. Both are worth visiting. I look forward to seeing future Disney parks in Brazil, Russia and India (I am sure we will eventually see all three) get it both right, right from the start.

[PS: do NOT visit Shanghai Disneyland on a rainy day. There are barely enough sheltered walkways and indoor areas to keep you dry. You will be soaked beyond belief, and there'll be nowhere to go. I can't believe the planners forgot that there's rain in Shanghai, lots of it.] 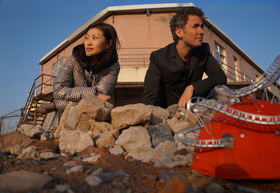 While hyped as one of the "biggest Disney Parks of all times", to me, it looks like an average-sized, yet ambitious Magic Kingdom. My concern is that, in Pudong, it won't be easy to shelter the Disney ambience from the humdrum of its densely-populated, suburbian surroundings.

In fact, I am perplexed by HOW exposed this new Disney undertaking is, given that all pictures below were taken from outside the property. May the berm rise high.

I believe Hong Kong Disneyland, with its stunning location against the backdrop of Lantau Island's mountain scenery, will forever be more magical than Shanghai Disneyland. So, to all those concerned about the long-term prospects of Hong Kong Disney, don't worry. 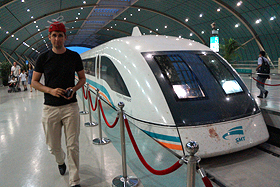 Construction is in full swing now, with multiple structures rising, including the Tron roller coaster, the Seven Dwarfs Mine Train, the Enchanted Storybook Castle, Pirates of the Caribbean and the resort hotels.

Fan Longde, the local shopkeeper who I've taken pictures with since 2010, is still there. In fact, he's the only man left, in the only house left, devoid of the village it was once part of. He now sells only cigarettes to his non-existing customer base, no more drinks; those who miraculously happen to pass by probably need a smoke to digest the rapid transformation.

In 1.5 years from now, Disney's 6th Magic Kingdom and 4th international adventure will be up and running, created by the most clever designers and engineers on earth, with technology not experienced before, and – believe it or not – even my friend Fan, the lone shopkeeper who turned into the last villagekeeper, looks forward to it. Enjoy the pictures: 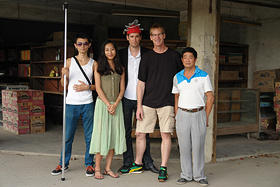 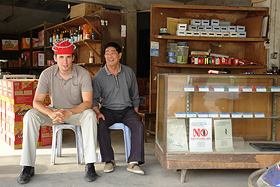 Here's an update from the Shanghai Disneyland site, one year after my last visit.

Not much to see yet apart from leveled land, with the area's characteristic water channels filled/removed. Multi-lane tarmac roads forcing their way through powerless countryside villages have appeared, and being primarily used by two- and three-wheelers are a sight to behold on their own.

Disney Imagineers take up residence in Shanghai these days, bringing much-needed creativity to China's uninventive theme park portfolio. Something tells me that the projected December 2015 opening date is set rather pessimistically - given that the land is ready now to have attractions built on it, it may open way earlier! 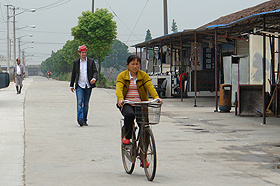 There is visible progress on the Shanghai Disneyland site: the huge moat that will encircle the Disney resort is being excavated, the three or four entry gates to the construction site are now equipped with barriers and security, and the site office has employees coming and going. And in the background, it's all digging and digging.

It's the third time I've been on site, and I must say it still feels out of place that a brand-new Magic Kingdom park will see the light of day here. Here, where life appears as if from different times, and from a different world. It's not the orange farms of Anaheim close to L.A.'s film studios. Nor is it the swamplands of the Disney-embracing Florida of the 70s, the harbor of high-tech and wealthy Tokyo, the middle-class suburbs of Paris, or the landfill on Hong Kong's airport island. It's the flat, remote, poor villages of Chuansha, Qigan, and Zhaohang, with all their dirty channels, crooked houses, toothless dogs, and smiling cyclists that made way for the invasion of the mouse; a mouse that became so huge and powerful that it can swallow men. 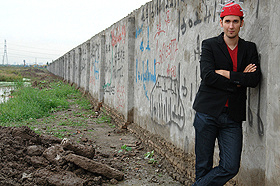 Holy swamplands! The villages I pictured on my last update below were indeed the right ones.

They have completely vanished.

A huge swathe of Shanghai suburbia has been flattened to make way for the future Shanghai Disneyland site and a wall just over half the height of the Berlin Wall protects the new depopulated hole that gapes in the area and separates the remaining Chinese villages from the Disney site. The on-site construction office is currently taking shape, supplied by armies of trucks that race through small village roads, blowing the winds of change through the thinning hair of old Chinese men on bicycles. It really looks like it sounds!

How do the locals take the change? I ask a local resident how he would react if his house would be next on the demolition list. He thinks for a few seconds, takes a drag on his cigarette, gets these reflecting Marlboro man eyes and responds: 'Well, let's see. It's ok. All up to the relocation package!'

Wow. Well. I really can't say now if this conversation was representative for the whole neighborhood, but it left an impression. Mao's disciples turned into business men. Good for me, since I am duly looking forward to seeing Disneyland's latest incarnation rising from the ground! 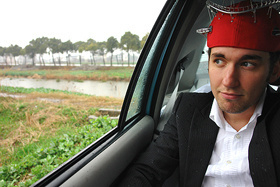 You really need a vivid imagination to picture a Disneyland park near Chuansha town. At present the area is a stretch of countryside halfway between Shanghai's Pudong International Airport and Shanghai city consisting of wetlands, woods, meadows and streams.

My assistant and I talked to locals in the quaint bicycle-filled streets of Qigan village and Zhaohang village and they are all very familiar with the Disneyland brand. Some say they have been eagerly anticipating the construction of a Disney park for nearly 10 years and were beginning to doubt it would ever come. However, in January 2009 it was announced that the Shanghai government and The Walt Disney Company had agreed to build a Disney park in this area, a plan which is being 'reviewed by the Central government' now.

The opening is scheduled for 2014. There is a small chance that I was picturing the wrong spot, but the future site is definitely somewhere very very close to it. I am extremely curious as to what is going to happen here. The moment Disney puts a fence in the wood, I'll be back!