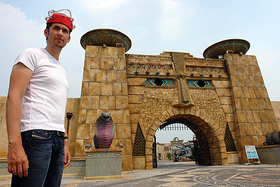 One Thousand and One Nights village - the War Game 'playground' Another peaceful (and empty) ride Street, filled with restaurants and shops Volcano entrance (with Disney Sea inspiration on the right)