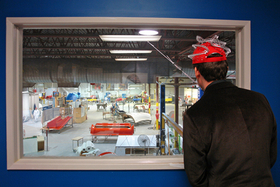 While you're hurtling down the water slides at Atlantis The Palm in Dubai, Caribbean Bay in South Korea or Aquatica by SeaWorld in Florida, you're probably too busy screaming to wonder which Bermuda-short wearing geniuses designed and built those funnels of slippery thrills.

Well, you certainly wouldn't picture them making their home next to the snow-covered pines of Canada's Rocky Mountains! But it is in the unlikely town of Kelowna, BC, that WhiteWater West's slide factory is based, producers of some of the most insane, inventive splash rides in North America, the Middle East and Asia.

Join me for a photographic tour through this water slide equivalent of Willy Wonka's chocolate factory: