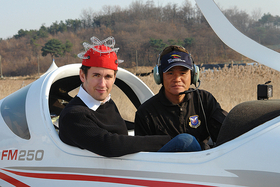 Upon returning to Hwaseong, my local helpers and I had the good fortune to bump into a hobby pilot who was just fixing his private airplane. A few minutes later we took off over the eastern part of the yet-to-be-developed Songsang Green City that will eventually turn into the Universal Studios Korea resort.

Construction hasn't commenced yet, but there are rumors that this might happen as early as spring 2010 in time to complete for the announced spring 2013 opening date. Judging by the official website, it is going to be a huge park, blessed with a talented and accomplished management team. I have high hopes for it!

On its website, Universal Studios Korea announces that it aims to become the best theme park experience in the region. To succeed, it has to beat the world number one theme park 'DisneySea' in nearby Tokyo – a sophisticated task. Steven Spielberg, a living Walt Disney, is still the creative consultant for Universal Studios theme parks. With such a captain at the helm, it's not impossible that they might just reach this lofty goal. 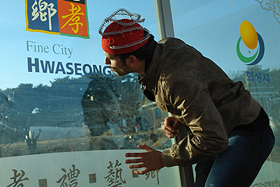 It is frigidly cold here in winter. I am on an artificial island in Hwaseong, South Korea, on which a property development called 'Songsang Green City' and the Korean Universal Studios theme park are due to be built. The flat, open land causing a chill sea breeze make me smile like the Grinch.

Local farmers point out where the site of the Korean Universal Studios is going to be. Posco Engineering, the local company in charge of building the park, told my local assistant that I’ve come way too early. Indeed. There is absolutely nothing here yet. No structure. No fence. Nothing. Just flat, green land.

It currently takes a three hour drive from the nearest international airport to get here, but if some bridges will be built, as I suspect they will, it would cut down the travel time from Seoul’s Incheon airport to 30 or 40 minutes and connect the Paramount Movie Park and the proposed MGM Studio Park with the Universal site. Wow, this is bitterly cold. Universal Studios will have a grill version in Dubai and a fridge version in Korea.

I hope they both see the light of day.