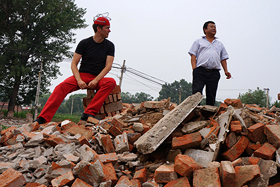 The Universal Studios Beijing project has been in limbo for quite some time, following my last visit in 2009. But now it's back, with a bulldozer.

The visual similarities between the Disney Shanghai site and the Universal Beijing site in the early stages of construction – well, destruction – are staggering, with vanishing villages in which the winds of change blow through the thinning hair of old Chinese men on bicycles. This time it's not a 86-year old cartoon mouse that takes it all over, it's a 74-year old bird, a woodpecker on life support.

I always try to get into the heads and souls of the villagers vacating their familiar, old world, to make way for these glorious globalization extravaganzas. Unfortunately, I tend to get polite and entrepreneurial answers, since they suspect me to be part of the (relocation package) game. I wouldn't expect a guy with a silly roller coaster hat to be part of anything.

As evident from the photos, the site today looks almost identical to the Shanghai Disney site back in 2010, so the announced 2018 opening date may prove realistic. 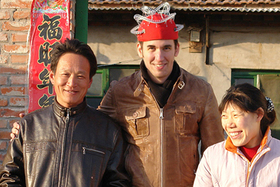 The plans for a Beijing Universal Studios theme park were announced just hours after I had already booked my flight to China. I instantly went to inspect the future site in the south-eastern suburbs of Beijing. Universal Studios Osaka, Seoul and now Beijing? It looks like there will be a (welcome) overdose of Jurassic Park rides in North East Asia.

The locals in the villages of the Tongzhou district (the proposed location of the park) were very warm-hearted and friendly but didn't have a clue what I and my local assistant were talking about.