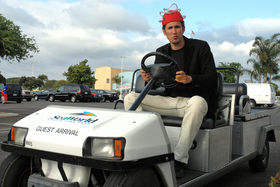 I was really disappointed when I visited SeaWorld San Diego the first time. This is the original SeaWorld! It's supposed to look awesome, isn’t it? Well, it doesn't. The marine theme park is located in a quite neglected stretch of land: no landscaped access road, no inviting atmosphere, no music – it's in the middle of nowhere.

Inside the park you feel like you are nowhere, as well. There is no architecturally appealing design to the buildings and no proper arrangement of the greenery. Grey structures randomly strewn around. That’s it?

The good part is that a number of these structures house some jazzy goodies: 'Journey to Atlantis' is a good, but not great, roller coaster/water ride mix and the park's premier ride attraction. The zoo is appealing: penguins to peek at, manatees to marvel at, sharks to spot and rays to touch and feed. But the real strength of the park lies in its three major shows: the dolphin show, the sea lion show and the – terrific beyond imagination – trademark killer whale show 'Believe'. Starring six jumping orca whales, it's incredibly exciting and professionaly-staged, with fantastic performances by the whales and insane stunts by their trainers.

My advice: come for the killer whale show, ride Atlantis afterwards and then go home.