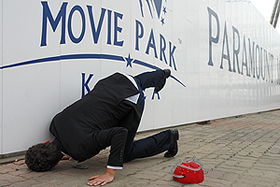 Since my last visit, a small promotion office and a couple of huge billboards have appeared on-site with some exciting illustrations of how the park and its attractions will look. But the best news: I watched an excavator breaking ground behind the billboards, transforming the former Daewoo parking lot into Paramount Movie soil. It was like watching lead turn into gold!

The surrounding 'New Songdo City' looks a bit anonymous and cold, but maybe it's just the temperature here in November that makes it feel that way. The impressive new bridge from Incheon airport to Songdo is now open: I counted the minutes and it was exactly 35 from the airport terminal to the future Paramount entrance, down from a 1.5 hour drive last time!

I have every confidence that the world's only Paramount Movie theme park at the crossroads of China, Russia and Japan is going to be a success.
If it gets built. 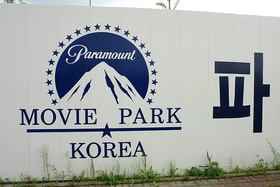 As of July 2009 there are still no cranes or excavators gracing the soil on which future Paramount dreams will be built. A site office, including a couple of preview billboards, seems to be under construction and proves that something is going on, though.

Next time I come back I want to see some signs of progress or I will bring an excavator and start digging myself! Paramount Movie Park, certainly a marvelous addition to the theme park world, has to come alive and The Theme Park Guy will tolerate no excuses! 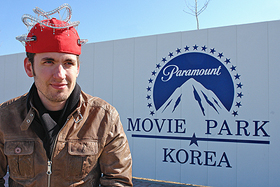 The first Paramount Movie Park is going to be built in South Korea, far away from it’s native Los Angeles.

A Titanic ride is expected here and a reproduction of the iconic Paramount Pictures Mountain is planned as the centerpiece for the park. The Ground Breaking Ceremony took place in November 2008; however, as of February 2009, there is only a construction fence surrounding a parking lot. But I love this fence. Paramount Movie Park. Magic.

The big question is whether Paramount will be the eagerly anticipated third big player to rival Disney and Universal. The Warner Brothers theme parks haven’t lived up to it yet. They are well designed, but lack creativity and inspiration in their rides. Will Paramount do the same? Buy pre-manufactured rides and repackage them with Paramount film titles? Or will they really experiment, go crazy and get some good people on board to create the ultimate Titanic sink-experience? I have high hopes for this theme park and will follow its construction closely!