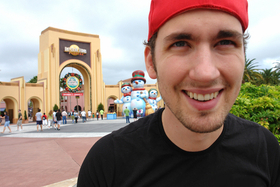 While it is the least beautiful of the existing Universal Studios parks, this is nevertheless a world-class theme park and a must-see when you visit Orlando.

'Revenge of the Mummy' is the park’s highlight, a well-themed, fast and surprising dark ride/ghost train/roller coaster-mix, different and superior to its Los Angeles version.

Equally excellent is 'Jaws', a boat ride through Amity Village with a panicking skipper on board fending off surprise shark attacks from left and right, indoors and outdoors, wet and on fire. It’s one of the best-timed and designed rides in the world!

Other rides include the highly atmospheric ‘E.T. Adventure’, which carries you on a mystical bicycle flight through an artificial redwood forest. A video introduction by the ingenious Steven Spielberg adds to its appeal. Also worth seeing are ‘The Simpsons Ride’ flight simulator, ‘Twister’ hurricane experience and 'Men in Black Alien Attack’ shooting ride, but I strongly recommend to do the other three first.

Unfortunately the design and setting of the park aren’t as inspiring as Universal Studios Hollywood or Universal Studios Japan, nor does it outshine the adjacent Universal’s Islands of Adventure. The rides, though, are absolutely stunning and unmissable.