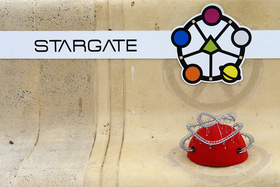 I love empty theme parks. It's like opening an extravagant Christmas present just for you. This one is brand new and no one is inside. Great.

After being announced 99% complete in a press release in 2007, it took another two years to complete the remaining 1%. That time could have been spent improving the roller coaster; it isn't pleasant and really hurts your head when going into the curves. The 3-D cinema shows a passable dinosaur and space movie, the children's playground is intriguingly huge and the ice rink great for practicing.

The real highlight is an employee, though. Oliver from the Philippines is the most talented magician I've ever seen. His knack for making things disappear defies belief, and justifies a trip to Zabeel's Park Stargate all by itself. Ask for Oliver at the reception. If he doesn't get overwhelmed with requests after this review, he might show up and wow you with some magic you certainly won't forget!