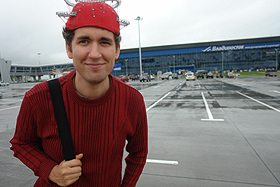 Primorsky Oceanarium on Russky Island is expected to become one of the world's biggest and best oceanariums. Unfortunately, it was still under construction, site access closed and visibility on the day of my visit extremely poor. As evident from my pictures, I came back empty-handed. Yet I experienced the big town of Russia's Far East, a place not even Asia buffs tend to stop by. The infrastructure was remarkable, with new bridges and highways built for the APEC summit 2012. The city itself I found astonishingly similar to Riga or Bratislava, typical mid-size Eastern European cities, as if there was no Pacific, no Japan, no China, no North Korea just around the corner. An odd Caucasian outpost, but with a hell of a lot of potential.

Sorry, this is really the most useless 'update' I have ever posted. You can find better pictures here!