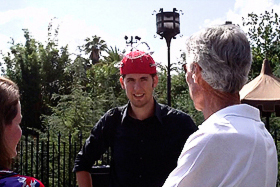 'Harry Potter – Diagon Alley' at Universal Studios Florida truly deserves the overused term 'immersive'.
While the Potter label gets people there in the first place, I think the most powerful part of this new park section is that it brings a piece of Europe, of European lifestyle, to Florida: four-storey buildings, people on the street, density and romance, and even a steam train! No deserted, low-rise suburbia.

Two anchor attractions grace its grounds: 'Escape from Gringotts', an enclosed roller coaster dark ride, which is a not too innovative hybrid of the classic Mummy Ride and the Spiderman concept of moving riders from 3-D screen to 3-D screen. It's not bad. It's not great. It's got a queue of only 20 minutes.

The 'Hogwarts Express' train, connecting the two Harry Potter sections in the adjacent Universal parks, impressed me, though. First, by how smartly it increases revenue from ticket sales. This is probably the most lucrative idea that any theme park had in the last 15 to 20 years. Who would NOT want to take that train? And second, with what's happening inside: the video running on the compartment window's side is predictable, but the shadows of characters and animals simultaneously appearing on the train corridor are surprising; an effect so unintrusively executed, but so powerful at the same time. Congrats to Universal Creative! 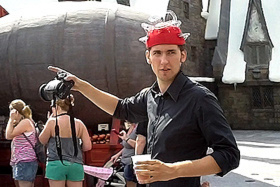 At the time of writing, a Universal Studios on-site-hotel room key buys you the privilege to enter The Wizarding World of Harry Potter in the mornings from 8am-10am. That gave me a chance to get in and, luckily, the signature ride 'Harry Potter and the Forbidden Journey' was fully operational today!

So what is it about? It's the same movie/show set-hybrid as in the ingenious Spiderman ride, but without the 3-D glasses. It is actually very similar; the difference is that your slowly forward-moving ride vehicle has you sat on a bench, attached to a giant robot arm, that swings you up in the air and enables totally free movement. Too much movement. While the ride was packed with well-done animatronics, great effects and surprises, the constant shaking on that no-escape-bench left me feeling motion-sick. Spiderman doesn't.

Is 'Harry Potter and the Forbidden Journey' the best ride in theme park history? Unfortunately not! It's not even the best Universal Studios ride – I consider Spiderman, Jurassic Park and The Mummy Ride all superior experiences. Harry Potter fans, though, will almost certainly be delighted by the attention to detail in the village and the long, elaborate and entertaining ride queue through the castle. 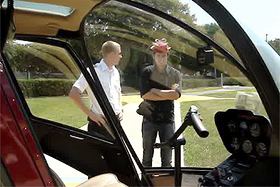 'The Wizarding World of Harry Potter' is a section within the existing Universal's Islands of Adventure theme park in Florida.

There will be a winterly-themed Potter-esque village boasting charmingly crooked Hogsmeade architecture and two overhauled 11-years-old roller coasters, but the true monster of a new theme park attraction awaits inside the castle:

I am really keen to see what the Universal Creative teams have conjured up with the Harry Potter signature attraction 'Forbidden Journey'! Press releases and official sources speak about 'robotic arms', 'revolutionary technology' and 'forever changing the theme park attraction experience'. If it is what I think it is – a pretty wild and random robot-arm powered flight through the digital Harry Potter world – it might well join the very best of today's top theme park attractions.

Universal Studios previously introduced amazing new technology and designs with 'Spiderman' and 'The Mummy Ride' and these are already 11 and 7 years old respectively. 'Harry Potter and the Forbidden Journey' will be open by June 18 at the latest. My hopes are as high as a broomstick can fly.

The photos below show the future Harry Potter castle under construction at Universal's Islands of Adventure in December 2008: