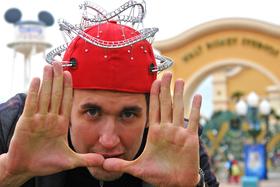 Walt Disney Studios is Disney's thrill ride park adjacent to its more family-orientated sister park. It's small and design-wise uninspired, but don’t ignore it for the following reasons:

'Rock ’n' Roller Coaster' is the most thrilling Disney roller coaster ever. It accelerates from 0 to 100km/h in just a few seconds right at the beginning, followed by loops, corkscrews and drops in the dark. The smooth tracks make you feel like you are flying and your back won’t hurt like in other coasters of this kind. A must.

'Crush's Coaster', opened in 2007, is a brilliant spinning 'Finding Nemo'-themed roller coaster, unique to this Disney park. Unlike on a regular coaster, the turtle-shaped vehicles move freely on the coaster tracks, leaning into the curves and spinning at the same time. It’s hilarious and unique. Queue early, since there's no FastPass ticketing system for this one.

'Tower of Terror' is a great haunted hotel-themed drop tower with a fantastic storyline and atmosphere, surprise drops into the dark and good performances by the staff. It's identical to the one found at Disney’s California Adventure.

The 'Studio Tram Tour' drags for 30 minutes long and proves rather unspectacular apart from Catastrophe Canyon, which will make you really panic for a few seconds. 'Stitch Live!', a funny interactive movie, is designed for kids but exciting for adults as well, especially if they become part of the show.

Walt Disney Studios is small and simple-looking, but provides a solid Disney-quality experience that's too often missed by day visitors to Disneyland Paris.