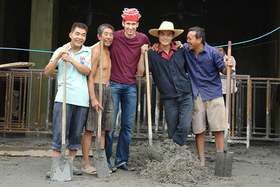 When I visited Happy Valley Sheshan, it was still under construction.

The park's five major roller coasters (most of them Swiss-engineered) and other state-of-the-art attractions stick out so contrastingly from the surrounding tranquil countryside of Shanghai's South-Western suburbs, that it looks like a giant alien spaceship landed here and left half of its futuristic equipment upon departure.

Thanks to Louis, Louis and Christine for granting me a preview of China's biggest theme park; it looks rather promising and is due to open on August 16, 2009.