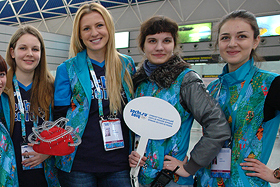 The construction site of the Sochi Olympics is gargantuan, yet it feels a little cold and clinical. It has me wondering what the villagers of Adler – the Sochi suburb that will host the Olympic venues – will do with all these stadiums and monuments once the games are over?

The Sochi-Park, now under construction adjacent to the Olympic site with German/Dutch manpower and coaster tracks, will leave something behind that’s worthwhile: Russia’s first modern theme park!

Smart, because it’s not themed around Wild West villages and enchanted castles, but around Russia’s history and heritage.

The budget is reportedly some US$ 300 million. That’s a solid amount, and, if invested and consulted wisely, can make for a charming park with heart and soul. Let’s hope for the best. The Bolshoy Ice Dome on the Olympic site Let's get a better view!

The Sochi Olympics site in February 2013

Stadiums under construction on the right...

... and the Sochi-Park site on the left

Artwork on the walls. 'Stefan, take your camera down please!'

Looks like a German student, but that's a Russian guy!

And that one, too, raised in the meteor town Chelyabinsk!

Office smiles on the Sochi-Park site

Closer look at the entrance area

The castle-themed hotel at the entrance under construction...

On the future castle's roof

All this, on the left and on the right...

...will turn into Sochi-Park, or 'Sochi Adventure Park'

Opening in one year? Not sure, though!